Finally, Night of the Notable IS OVER!!!! No more worrying about messing up on stage, no more worries about preparing my costume, and no more long, painful, nights of finishing my learning centre. It’s been a few days after the Night, and I can finally reflect on this day with a well-rested brain.

I can’t think of anything bad that happened over this whole project, and specifically on the big night. Everything went really smoothly, and I thought everyone, 9s and 10s were all prepared and enthusiastic. The days leading up to it, the only thing I was nervous about, were the grade 10 speeches, but even though that was most nerve-racking thing, I can’t believe how well they went, because EVERYONE KILLED IT! Hands down, the speeches were the highlight of the night. Everyone from Jamie to Nadia were fantastic. Everyone was so passionate, loud, emotional, and not a single person messed up.

I was the second to last person to give my speech, and I didn’t realize how much I hated being near the end was, until I was backstage. Watching the afternoon Talons give their speeches, and seeing all the people in the audience really made me shake. As their speeches wrapped up, and took their bow, I was ready to die. But the worst feeling, is backstage, when you see everyone finished, jumping and celebrating that they are over, and you are standing there, still having to go. The suspense, and waiting was so much, and right before I was up, I completely blanked out. I remember muttering out loud the first few words, just to remember. After I gave my speech, the nerves were out of me. It was over, and the hardest part of the night, was over. 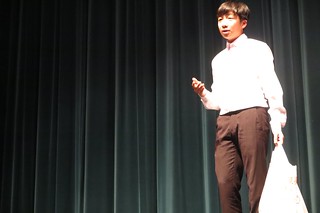 I was pretty proud of my learning center. Obviously, if I had prop tanks, it would of been really cool to recreate the tank man scene, but no tanks were found. Instead, I went with a poster board, with the focal point being the image of the tank man, and also the actual video of the tank man scene. Unfortunately, some technical issues with my flash drive meant that the video didn’t work. Oh well. I also included some photos of the Tank man scene, some photos of the Tienanmen square protests, and some signs that would have been seen, during the protests. As my food, I decided to bring fortune cookies (I know they are only in North America), because they go with the Chinese theme, and they are also easy to distribute, since there is lots for everyone. 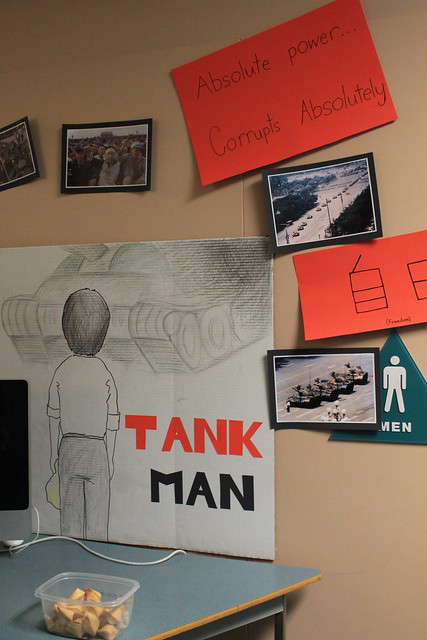 At the beginning, one goal I had was to not only learn about the Tank Man, but also inform many others of him. Without any idea of his identity, Tank Man has slowly been dying down, and I was very happy when so many people, who’ve never heard of him, now know what he did, and the context which it was in. Even the people who knew about him were delighted to see that I reminded everyone of who he was. Even though there may have been little information on Tank Man, there was a lot of really interesting, and important events that happened before, and after the Tank Man event, both of which I learned a lot about through my research. I thought with the context, I really showed how he was eminent.

Of course, this night wouldn’t have been possible without the work and time put in by all three of the Talons teachers, Mr. Jackson, Mr. Albright, and Ms. Mulder. I thought the night ran really smooth, and everyone really pitched in the setup, and take down.

Overall, I really loved this year’s Night of the Notables, and I thought I improved a lot from last year. The grade 10 speeches will always be the highlight of the night, and I am really glad at the effort I put in. Since this is my last eminent person project, I can’t wait to come watch our grade nines next year. Let’s see if they can 1-up us next year.